Yesterday, while out looking at property, Ken and I came across this bird in a driveway.....it would not move..it's feathers became ruffled and it chirped, squawked, at us rather loudly the closer we got.  I went back to the truck and grabbed my camera and took a few pictures.  When we were leaving Ken took a closer look, and he saw eggs..she was nesting....I could not see them...until I blew up the photo's on the computer.....here are the results...so exciting to me....: )  Here is also some info on the bird.

The killdeer is a medium-sized plover. The adults have a brown back and wings, a white belly, and a white breast with two black bands. The rump is tawny orange. The face and cap are brown with a white forehead. The eyering is orange-red. Wikipedia
Scientific name: Charadrius vociferus
Higher classification: Charadrius 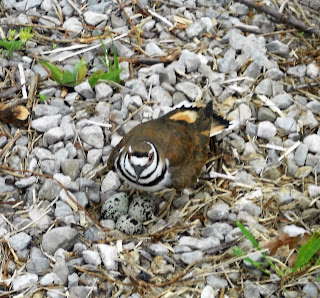 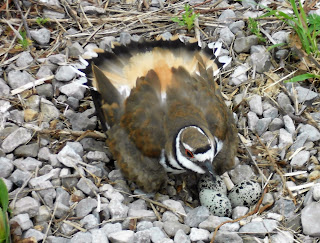 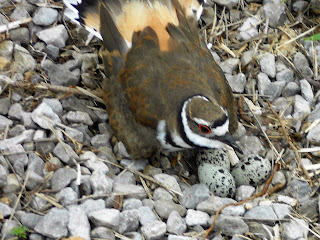 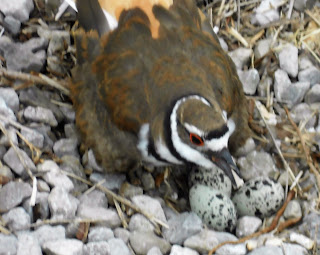 I really hate that I cut off her tail feathers...but I was

really trying to see the eggs...and I couldn't while taking

the photo's....so I just zoomed in as close to where Ken

said they were and took the last couple pics. Maybe I will

do better next time.  But I see the eggs now!

They are migratory in northern areas and winter as far south as northern South America. They are rare vagrants to western Europe, usually late in the year.
These birds forage for food in fields, mudflats, and shores, usually by sight. They mainly eat insects. In built up areas they will forage in large parking lots. If those lots are well lit, they may forage at night.
Their name comes from their frequently heard call. These birds will frequently use adistraction display ("broken-wing act") to distract predators from their nests. This involves the bird walking away from its nesting area holding its wing in a position that simulates an injury and then flapping around on the ground emitting a distress call. The predators then think they have easy prey and are attracted to this seemingly injured bird and away from the nest. If the parent sees that a potential predator is not following them, they will move closer and get louder until they get the attention of the predator. This is repeated until the predator is far from the nest, and the killdeer suddenly "heals" and flies away.[14][16]
Their ability to exploit a wide range of agricultural and semi-urban habitat has helped keep them common and widespread in their range.

Email ThisBlogThis!Share to TwitterShare to FacebookShare to Pinterest
Labels: Interesting

Neat post and you happened to be in the right place at the right time. Stuff like this is fun to encounter.

Thank you BW...it was fun, especially when I blew them up on the comp....and could really see what was there...WAY COOL!

Boids, 'ya just gotta love boids....even the ones that wake you up too early in the morning!

I do...Ken and I are talking about getting a boid watching book...to be able to identify them!

I have a Killdeer nest at the propane terminal I operate in CLinton, TN. It has a large amount of open gravel which they favor. Sometimes there has been as many as three separate nests, through the season. They incubate their nests 21-28 days so when the babies hatch, they're more formed that tree nesting birds, complete with feathers. After the feathers dry, they will be up and walking. It's like giving birth to a pre-teen. The parents will change their song to a repetitive style that encourages the hatchlings to stay close to mom and dad. You will be able to get closer to the nest with one of the parents sitting on the eggs if, you are in a vehicle (just don't get too close). They don't recognize a car or truck as a threat like a human or animal does. A few years back, I intervened when a black snake got within 4 feet of a nest. The adult Killdeer was raising a ruckus and that is what got my attention.

Good luck with you new hobby!

Thank you bayouwulf...Ken saw a Cardinal today...we think that is what it was...it was red anyway...and said it was the first time he had seen one in years and years...so yes...I think this should be something fun to do together!

We went back to that property today, and there was another nest further down the drive...and another momma bird sitting it, made us smile!

Have Killdeers here too,as a matter of fact our old farm had plenty of them. I've seen their broken wing act often. Local State Wildlife area is named after them also.

Had a female Cardinal in the backyard yesterday, still red in color but more brown on body than the males.Helps camouflage them on the nest I suppose.

killdeers(killdees, in some locals) are very fun birds to watch, not only for their theatrics, but also for the funny way they scoot around on those stilts for legs....every time I see one, I always remember one of my late father-in-law's favorite admonitions,"now don't you be letting your catfish mouth be overloading your killdee ass!"

Sounds like he was a real sweetheart, and rather fond of you...LOL